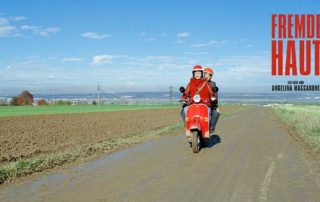 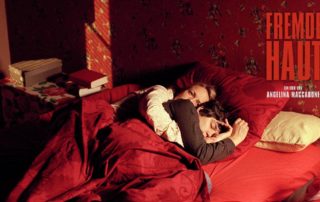 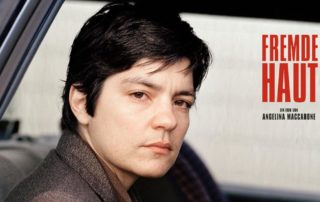 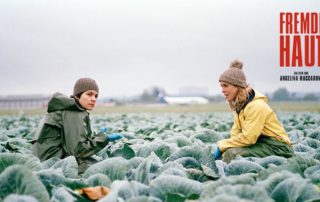 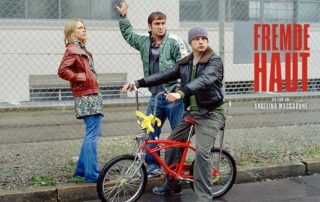 In view of the ongoing reports of persecution and torture of lesbians and gays in Iran, FOREIGN SKIN couldn’t be more topical.

The lesbian Iranian Fariba (Jasmin Tabatabai) faces the death penalty in Tehran. She manages to flee to Germany, but her asylum application is rejected.

Political drama, moving love story and unvarnished German reality.
In FREMDE HAUT Angelina Maccarone tells with great accuracy of uprooting and the longing for identity, of impossible love in times of exile and persecution, of the indomitable will of a woman to find her place in life, to arrive – in another country, another culture, a new love.
FREMDE HAUT impresses with Jasmin Tabatabai’s great acting performance and gets under your skin with its radical intensity.

„When Jasmin Tabatabai becomes a man, she does it with the same desperate, calm seriousness as Hilary Swank, who won the Oscar for “Boys don’t cry”.”
Anke Sterneborg, Süddeutsche Zeitung

„In a terrifying way – with the current headlines of persecution, executions and torture of homosexuals in Iran – “Unfamiliar” couldn’t be more topical. However, this film is not simply a poetic indictment against Iran. He stands up for the freedom of man to move freely, to live freely.
Will O’Bryan, Metro Weekly

„A passionate statement for love and the search for a place in life. A film that is emotional without being sentimental. A… story that makes you laugh and cry.“
Kinozeit.de

„Jasmin Tabatabai grandiose… every gesture, every look, every movement as a man sits without being even a touch exaggerated… extremely worth seeing.“
Siegessäule

„… convinces … not only through its political aspirations, but above all through its emotionality.“
Zitty

The Iranian Fariba (Jasmin Tabatabai) is young, beautiful, is intelligent and faces the death penalty because her relationship with a married woman has been exposed. She made it to the Frankfurt airport camp, where her asylum application was rejected. When Siamak, an Iranian fellow inmate, learns of his brother’s murder, he takes his own life. This opens up the way out for Fariba – she takes on his identity. As a Siamak Mustafai, she receives a temporary residence permit in the Swabian town of Sielmingen.

Fariba knows Germany from art and literature – she is not prepared for the Swabian provinces. She works illegally in a sauerkraut factory, speaks like a man, acts like a man. Every wrong word, every contact is linked to the danger of exposure. And she only wants one thing: her feminine identity back. Her colleague Anne (Anneke Kim Sarnau) takes a liking to the strange stranger. Fariba cannot resist. She risks everything and happiness seems within reach.

Rental with the support of